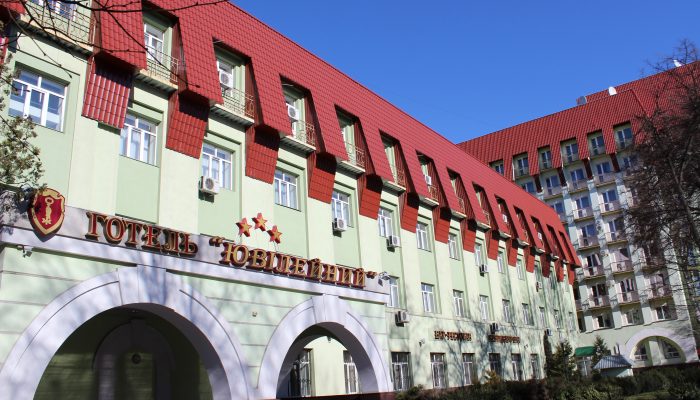 The hotel has been counting its historical route since 1996. Its opening was timed to the celebration of the anniversary of the leader of domestic engineering industry – the 100th anniversary of successful robots in the market of equipment for the nuclear, chemical and oil industries.

The guests of the hotel are delegations of industrial and business circles of the near and far abroad: the USA, Italy, China, India, Turkey, Bulgaria, Iran, Argentina, the Russian Federation, Belarus, Kazakhstan, Turkmenistan, Uzbekistan, Azerbaijan and many other countries.

Since November 1, 2007 the hotel “Yubileinaya” has become the largest in Sumy and the region, with a number of rooms in 78 hotel rooms, of which 3 suites, 9 suites, 15 junior suites, 23 double and 28 single rooms of business class. The infrastructure of the hotel “Jubilee” creates favorable conditions for combining business and leisure.

Among the guests of honor of the hotel are the Presidents and Prime Ministers of Ukraine, the Ambassador of the Russian Federation in Ukraine Viktor Chernomyrdin, the President of the National Olympic Committee of Ukraine Serhiy Bubka, the poet, prose writer, screenwriter, publicist, actor Yevgeny Yevtushenko, the first violin of Ukraine, popular singer Assia Akhat, Musician, poet, composer, artist and producer Yuri Shevchuk and the group “DDT”, Merited Master of Sports in Swimming, three-time Olympic champion, world champion, European champion, World Cup champion Jan Klochkov, The master of sports in swimming, the world champion, the champion of Europe, the four-time winner of the World Cup in swimming, the silver medalist of the Olympics in Sydney Denis Silantiev and many other famous statesmen, representatives of the creative elite and big business.